Have y’all had a chance to watch the new Apple TV+ series ‘The Last Days Of Ptolemy Grey?’ 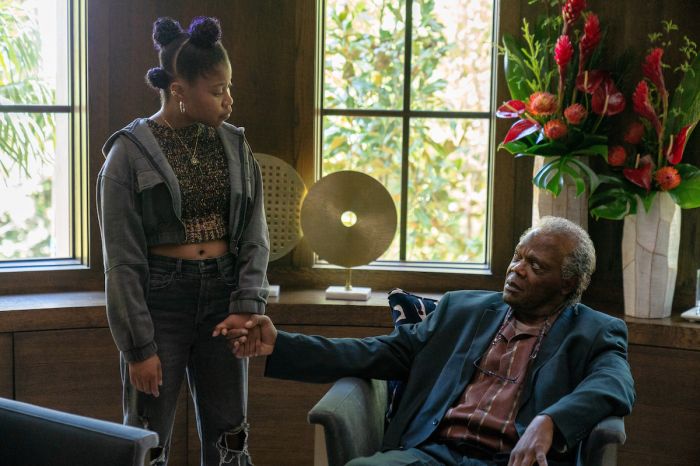 “The Last Days of Ptolemy Grey” stars Samuel L. Jackson as Ptolemy Grey, an ailing man forgotten by his family, by his friends, and by even himself. Suddenly left without his trusted caretaker and on the brink of sinking even deeper into a lonely dementia, Ptolemy is assigned to the care of orphaned teenager Robyn, played by Dominique Fishback. When they learn about a treatment that can restore Ptolemy’s dementia-addled memories, it begins a journey toward shocking truths about the past, present and future. The first two episodes of the series premiered on March 11th, followed by the third episode on March 18th. We’ve got an exclusive sneak preview clip from Episode 4 which features a touching moment between Ptolemy and Robyn.

At this point in the series, Robyn (Dominique Fishback) is taking care of ailing Ptolemy Grey (Samuel L. Jackson) and in one of Ptolemy’s rare moments of clarity, Robyn confides in him about one of her darkest moments. The chemistry and strong bond between the two characters is evident in this clip as Robyn expresses how attached she has grown to Ptolemy. Check out the clip below:

Now that is some phenomenal acting! When you watch these two, you know you are watching two of the greatest actors alive right now. It’s so incredible isn’t it?

Here’s what else to expect from the episode:

After unearthing a long-forgotten treasure, Ptolemy makes a plan. Later, he meets with a friend of Reggie’s and learns revelatory details.