Have you finished Season 2 of ‘Bridgerton’ yet? 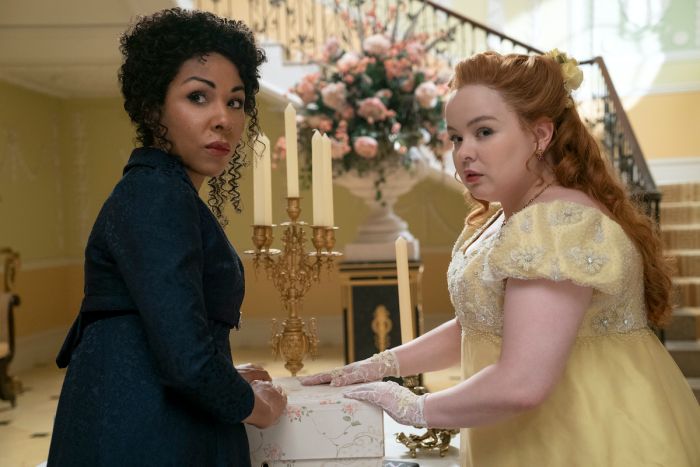 BOSSIP’s Sr. Content Director Janeé Bolden bonded with ‘Bridgerton’ star Nicola Coughlan ahead of the Season 2 premiere of the show about Lady Whistledown’s gossip writer role on the show.

“It’s really cool to get to play two characters on the show,” Nicola Coughlan told BOSSIP. “It’s great to get one part is great but then to get two it’s like, ‘Oh she’s that as well?’ What’s it like for you to write gossip? I’ve developed a terrible habit of eavesdropping on people!”

If you’ve been watching ‘Bridgerton’ this season, you already know that Lady Whistledown finds herself in some pretty tough predicaments, Coughlan agreed that her role took on a lot more responsibility this time around.

“In Season 1 she created this character but hadn’t realized how much influence and impact she had,” Nicola Coughlan admitted. “She messed around with it with her cousin and now she gets what it’s going to do should she wield this power in the wrong way and she really grapples with it. Firstly, she has the money. Her family is in dire straits and she could save them and she’s like, ‘I’m good.’ You also have to remember, she is like this kid at the same time. She’s not this grown-up. She comes up against some really difficult scenarios in which she goes, ‘Okay I can really mess things around by doing this and I might have to.’”

We also had to have a little heart to heart about Penelope Featherington’s undying devotion to Colin Bridgerton.

“I think Colin is such a solid, stand up guy,” Nicola Coughlan said of Penelope’s crush. “You look at all the Bridgertons and I’m like, ‘He’s the best one!’ He’s sweet and he’s like stable and he thinks she’s funny and he’s kind. I feel like Anthony is all brooding and complicated and Benedict is all about his art, where as Colin is just like a good steady guy.”

We’re all for Penelope finding love but we’re not sure Colin is THE ONE. What do you think?

For her part, Nicola says she believes Penelope is still finding herself!

“I want her to find love too but I think she’s got to figure out who she is first,” Nicola added. “She was unable to express herself in Season 1, and now the Whistledown and Penelope sides are sort of merging in Season 2. There’s little bits of Whistledown poking out. She makes little comments and things but like I always say it’s like her Britney Spears seaon, ‘she’s not a girl, yet not a woman.’ So she’s got to become a woman before she can find love.”

We also had to ask Nicola about Penelope’s place in the Featherington family. We feel like she’s the Cinderella of the bunch, but Coughlan said she actually sees plenty of Penelope’s mom in her character.

“I think we all in our families we all have these traits, we all have a bit of our families, not just literal DNA, but personality DNA within us so I think that weirdly Penelope is a lot more like her mom than she would like to admit,” Coughlan said. “Not the materialistic side, but I think a lot of Whistledown is born of the way Portia Featherington speaks. Portia is quite catty and quite cutting and I feel like she gets it from that. I feel like we all do where we go back home and we regress so even if she thinks she’s like this big businesswoman in the world, when she’s at home she’s like this teenager who is like, ‘Nobody understands me’ And also she doesn’t get her family’s struggles either. She doesn’t really feel it deeply because what’s going on in Penelope’s world is the most important thing, not all of that stuff.”

Check out the full interview below:

Season 2 of ‘Bridgerton’ is streaming now on Netflix!