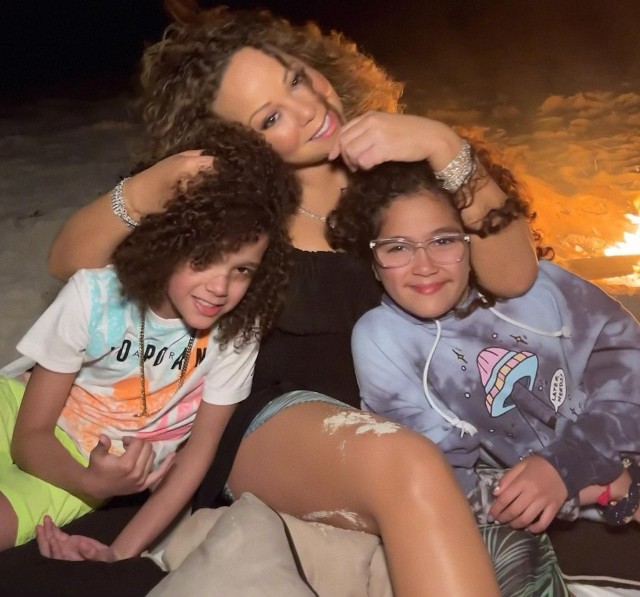 “Bonfire moments,” Carey captioned underneath a series of pictures shared on Instagram. Mariah gave her social media followers a variety of shots with one candid featuring her sitting alone by the fire. Carey received loved from her boyfriend in the second shot uploaded to Instagram. The final picture in the series was reserved for Mariah and her kids who leaned into their mom’s embrace as the fire burned in the background.

“I’m convinced a wind machine follows you around,” one fan said in reference to Mariah’s seemingly perfect shots. “I live,” the social media follower declared. Another fan said, “The twins grew up so fast.”

Monroe and Moroccan will soon celebrate their eleventh birthdays. The youngsters were born on April 30, 2011, which was around the third anniversary of their parents’ wedding ceremony. Mariah Carey and Nick Cannon remained married for five years after welcoming their twins. The celebrities parted ways in 2016. Mariah Carey recently spoke about her life as a working mom and the toll it ultimately had on her marriage.

“Along with double the joy came double the responsibility,” Carey shared with the press. “It was a lot of work and a lot of having to be home and available,” the celebrity admitted. “Making the necessary adjustments to being working parents in entertainment took its toll on our relationship, and the end of our marriage came fast, as it began,” Carey explained.

“Honestly, I think Nick and I could have worked it out between the two of us, but egos and emotions got inflamed (which can translate into many billable lawyer hours, and ultimately, it did,” Mariah revealed. “It was tough,” she admitted. “We both wanted to make sure everything was cool for our family.”

Monroe and Moroccan are Nick Cannon’s oldest children. The celebrity father is expecting his eighth child to arrive later this year.