Jayson Tatum may have missed out on an NBA championship this year, but it looks like he’s already moved on to bigger and better things. 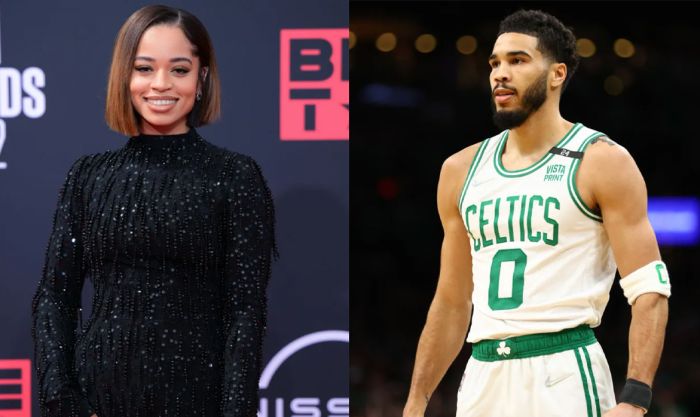 Social media went crazy over the holiday weekend after pictures and videos from Michael Rubin’s 4th of July party made their way onto the internet. Some big names were in attendance at the shindig, including Travis Scott, Kendall Jenner, Devin Booker, and Odell Beckham Jr–but no guests who were spotted at the party caused a bigger online frenzy than two surprising names.

Boston Celtics star Jayson Tatum and “Trip” singer Ella Mai were seen with one another on July 4th, looking like perfection in their matching all-white outfits. While the clip of them was just a couple of seconds, both Ella and Jayson are flashing huge smiles as they stick by one another’s side at the star-studded bash. This relationship is far from confirmed, but fans were so shocked by the unexpected pairing that Ella Mai’s name started trending on Twitter.

As pointed out by some fans, there were rumors previously that these two were an item, though they’ve kept their relationship private, for the most part. Back in 2019, Ella Mai was caught shooting her shot at Jayson, replying to a photo he posted of himself on Instagram by leaving the eyes emoji in his comment section.

In May 2020, Clutch Points reported that they were together, adding that Jayson’s Celtics teammate Jaylen Brown is dating Ella’s close friend and R&B singer H.E.R and that they reportedly had some “double dates.”

Now, there’s a lot of folks mad about this relationship…mostly because they wish that was them. Check out reactions to the latest celebrity couple down below: