On the 21st of October, Jeezy teams up with DJ Drama to drop his SNO FALL mixtape. The pair announced the project earlier this month to the delight of fans. Jeezy is heralded with one of the best Gangsta Grillz tapes of all time with Trap Or Die, so fans have high expectations. Judging from ‘I Ain’t Gone Hold Ya‘, it’s going to be great.

On IG, Jeezy has put up a short video showing the making of the project which it looks like will be part of an upcoming documentary. About halfway into the clip, the camera focuses on a whiteboard in the studio which shows 13 tracks, presumably a tentative track list for the tape.

It has fans very interested because one of the features is Rihanna on a song which looks to be called ‘Mines’. Ye is also on there. Also on there as features are EST Gee, Post Malone, 42 Dugg and DJ Khaled. Who knows what will actually end up on the final version but if it does happen, it’s a big deal.

Check out the whiteboard and video below. In case you missed it, Rihanna is reported to have recorded two new songs for the upcoming Black Panther: Wakanda Forever movie. 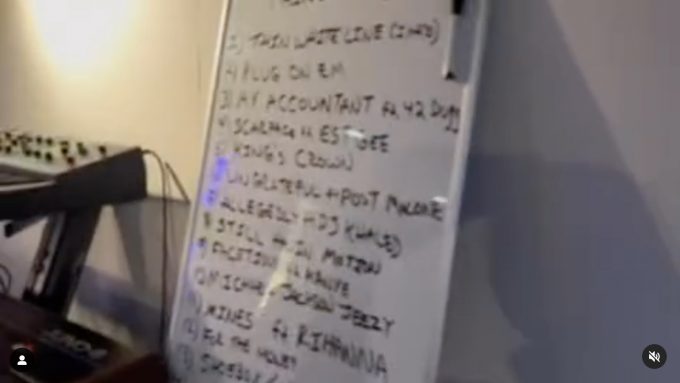 Previous articleWill Rihanna Use ‘Black Panther 2’ For Her Return To Music?
Next articleFox News Seeking Leaker Of Kanye-Tucker Carlson Outtakes