A #RHOP husband has had enough of allegations that he made people “uncomfortable” and he’s calling out “miserable a** women” that are spreading the claims. “These women were bored as f***,” said the irritated Bravo star. 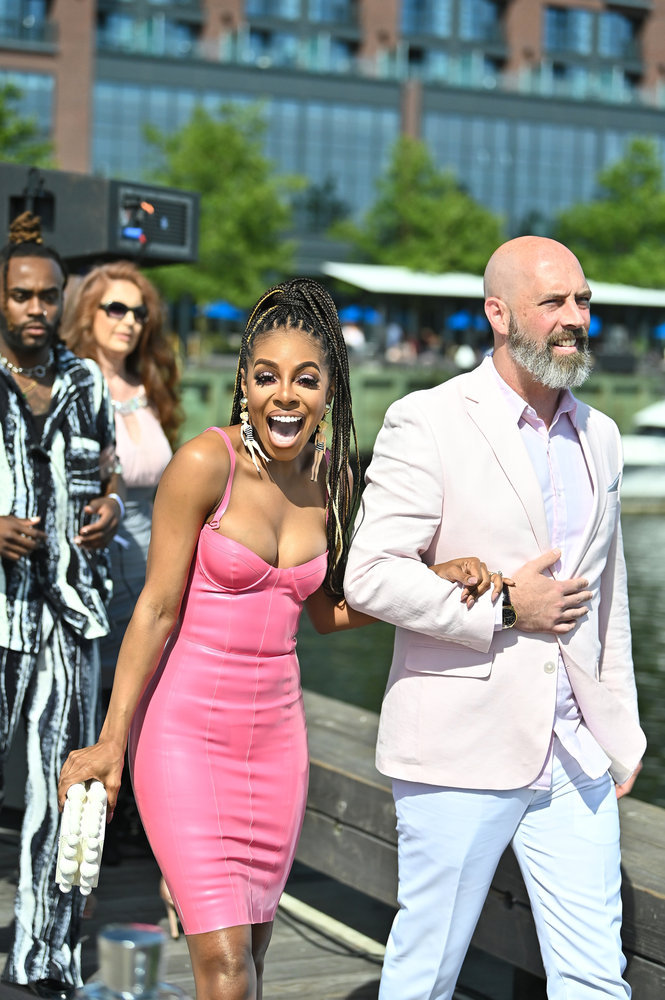 As previously reported Candiace Dillard and Gizelle Bryant are at odds over Gizelle’s claims that months ago during the #RHOP reunion, Candiace’s husband Chris Bassett, made her “feel completely uncomfortable”, in her hotel room.

Gizelle couldn’t recall anything inappropriate that Bassett said or did when they were alone, but insisted the husband was trying to be a “sneaky link” who wanted to see if “she was with it.”

On Sunday, viewers saw an irate Candiace’s reaction as she urged #RHOP producer Eric to call up Ashley Darby’s estranged spouse Michael Darby who was accused [but acquitted] of sexual assaulting a #RHOP cameraman if they were looking for an inappropriate-acting husband.

“I will not have it!” said Candiace. “My husband, who has never given anyone a reason to think ill of him is now the target? Now, help me understand,” she said while telling him to not edit out her “fourth wall” moment where she acknowledged the cameras.

All the while Candiace was heard ranting about the situation, Gizelle played aloof and didn’t acknowledge that she was the reason for Candiace’s anger.

“I think maybe she said her stomach hurts,” Gizelle told the other housewives after Candiace stormed off.

During a lunch date with his wife, a stressed-looking Chris Bassett seemed dumbfounded by Gizelle’s claims.

“First I was angry, like why would you make something ot of nothing?” said Chris. “That’s not my personality, I’m actually always doing something to make someone feel comfortable.”

He added in a confessional that Gizelle actually asked HIM to come to her room to chat, not the other way around. He also said that he kept the door open so that no one would suspect that something inappropriate was happening.

“When the conversation is turned to luring or setting up, the word usage is upsetting. I don’t even ask to go to her room—I said Gizelle, can we talk?” said Chris. “And she suggested that we go to her room.”

By contrast, Gizelle was seen doubling down about being uncomfy and told Karen Huger that she remembered saying to herself “I do not feel good and I want him to leave.”

“You could’ve said it without the cameras,” said Karen to Gizelle who countered and said it was her fellow “Green Eyed Bandit” Robyn Dixon that brought up the “uncomfortable” accusation in the first place.

Speaking of Robyn, she sat down with Chris and Candiace to discuss what allegedly transpired and shared her side of the story.

“I don’t think Chris Bassett had any intention of being sneaky or whatever,” said Robyn.

She then made a declaration and said that their friendship is officially over.

“Gizelle is dead to me,” said Candiace.

Gizelle wasn’t the only one to call out Chris however, Mia Thornton also said that something went down with the chef—but she later walked it back on social media.

While meeting up with Robyn, Mia Thornton alleged that she felt Chris “staring her down” at Karen’s spring kickoff and said she “kept catching” him looking.

“So maybe there is some truth to what Gizelle is saying,” said Mia with a smile.

Mind you while Mia was making these allegations, #RHOP’s production team rolled clips from the event showing Chris looking everywhere BUT in Mia’s direction.

On Twitter, Chris called her out and said that her allegations were “not cool” before Mia apologized while blaming what she said on margaritas.

“I felt stares for sure but not in an inappropriate manner,” tweeted Mia after initially laughing off a fan calling her a liar.

“Honestly, I felt insecure because I was so skinny, pale, and frail from being sick. Nothing but love and respect for you and Candygal [Candiace]. So sorry for even saying it.”

On Sunday a fed-up Chris insisted that the “miserable a** women” of #RHOP made up the allegations against him out of boredom. He also hinted that he might be leaving the show.

“I am now fully convinced these women were bored as f***…got nothing going on, and just had to make up some bulls***,” tweeted Chris. “In NO WAY do I believe production had anything to do with this…just some miserable ass women on their own.”

On Watch What Happens Live, however, Gizelle Bryant continued to stick to her story and denied that she invited Chris to her room.

“We were in a private room, the door is closed—I just don’t want to be in a room with a married man,” said Gizelle.

What do YOU think about the Candiace Vs. Gizelle “uncomfortable” Chris Bassett allegations?