An iconic housewife’s choice of wedding ceremony attire is raising eyebrows from folks who think she tried to “outshine” the bride with the “inappropriate” gown. 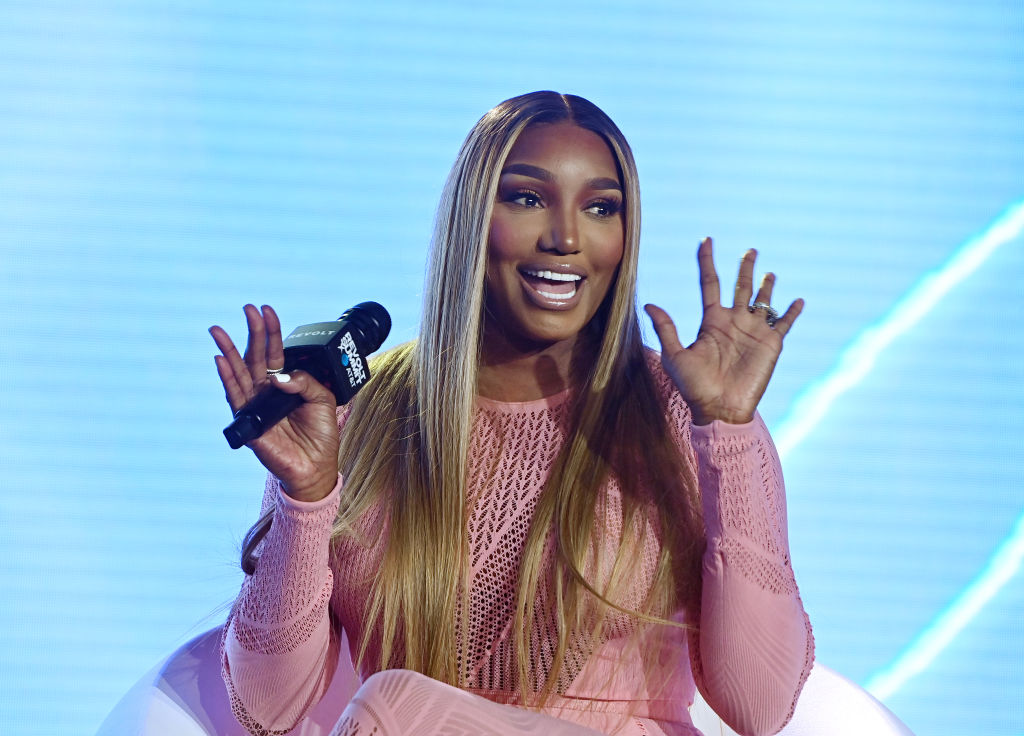 before tying the knot again, this time during an extravagant American celebration at the St. Regis.

And while most of the attention was rightfully on Mr. and Mrs. Guobodia, a number of people on social media couldn’t stop chatting about NeNe Leakes’ look for the nuptials.

NeNe attended the second wedding ceremony in a scintillating dress offset by elegant hair and makeup. The dress was sheer and seemingly showed off Leakes’ nipples and underwear.

HelloBeautiful reports that Leakes donned a $2,550 “dreamy” chain dress from Casze paired with black peep toe pumps while her blonde locks were fashioned into loose curls and a side part.

and the reality icon’s face was expertly made up by Freedom of @2Gifted.Hands.

The beauty brought her fashionable boyfriend Nyonisela Sioh as her date to the nuptials.

NeNe herself also spoke out about her look and hopped in FashionBombDaily’s Instagram comments to praise the designer of the garment.

“This designer is dope! Hooked me up in 1 day!” wrote Leakes. “Issa slay.”

NeNe might have been baring her baaawdy to show off the results of her recent surgery. As previously reported she underwent 360 liposuction and a “professional mini BBL” in August via Dr. Okoro of Georgia Plastic and Reconstruction.

What do YOU think about NeNe’s Porsha Williams wedding look? Social media’s not too pleased.

While NeNe’s look is a hot topic of discussion, other guests attended Porsha’s wedding in much more traditional attire.

See some stunning standouts below.

Cynthia Bailey of course looked stunning at Porsha Williams’ second ceremony and she posed for pics on the St. Regis hotel’s staircase.

While Jennifer Williams served elegance in a body-hugging gown with a train.

She shared several pics from the big day and revealed that she was styled by Jeremy Haynes a.k.a. “No IG Jeremy.”

Like Toya, Kandi was styled by Haynes as well who outfitted her in a curve-hugging gown and gowns. Kandi brought her husband Todd Tucker as her plus one.

Mielle Organics CEO Monique Rodriguez also attended the nuptials with styling by Jeremy Haynes. She and her hubby shone in intricate all-black looks with added bling.

Rodriguez posed for pics with Toya and model Chantaille Elise.

and Real Housewife of Potomac Candiace Dillard brought her mom, Ms. Dorothy, as her date.

Monyetta Shaw who stars as a “friend” of The Real Housewives of Atlanta donned a custom Matopeda Atelier dress that perfectly matched her “Heath Bar” hubby’s custom suit.

She posed for pics with her wife Da Brat and showed off her copious curves in the dress.

What do YOU think about the looks at Porsha Williams’ wedding?

Previous articleWhat Is The Instafest App For Spotify?
Next articleStormzy Talks Reckless In His ‘This Is What I Mean’ Video